Interactive Videos: Moving Images are Worth Millions of Words

Videos have virtually turned the entire advertising industry upside down. They outperform previously-established advertising formats by far. This is because they’re much easier to consume: users dive into a world of colorful imagery, emotions, and multi-faceted information with just a single click. In a few seconds, impressions can be conveyed, which even an entire library couldn’t. Clever advertisers can, however, optimize the success of their video content even further by adding interactive elements.

Sometimes, video content may have an advantage over long articles. With video, users have the convenience of simply viewing a video instead of reading long text. Even more, although textual content could be written beautifully with an engaging tone of voice,  videos have the upper hand to provoke emotions via moving visuals, sound, and text. As a triple threat, video content has the ability to also go in-depth.

As we all know, a picture says more than a thousand words. Meanwhile, moving images say millions of words. Forrester market research has actually shown that a video sequence of just one minute has the same impact as 1.8 million written words.

There are many reasons for this, such as:

As a result, video content often leads to better advertising effects than, for example, sponsored articles or banner ads. In addition, well-produced clips do more than just boost brand perception. In four out of five instances, videos also push intentions to buy and thus result in significant increases in revenue. This has been proven by a study recently published by GfK, together with the social media networking site, Facebook.

There are many reasons for advertisers to put more effort into videos as a medium. However, many are discouraged by the immense costs that usually come with producing a video clip. Companies suspect that these costs could reduce the overall gains of their campaign.

Advertisers may perceive video creatives as their campaign to be expensive due to production costs, however, if advertisers use the right tools and strategies, anything can happen. Enter interactive video ad formats: often times, this modern and technological innovation enable advertisers to rely less on their video production and more on their strategies for their campaign goals. Interactive formats’ design enables advertisers to create video content that stands out from the rest, further boosting the viewers’ attention rate, leaving even greater advertising success. 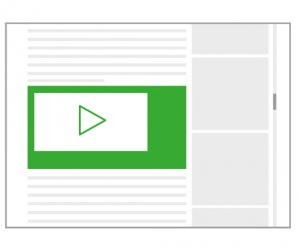 An example of an Interactive Video Ad Format. The green illustrates an interactive layer framed around an advertiser’s video content.

Interactive formats often include a layer framed around a video, where advertisers can embed their video. They then provide images and the URL of their desired landing page on this layer, creating buttons displayed around their playing video, inviting users to engage. The takeaway? Instead of advertisers relying on expensive production costs to create meaningful and quality content, interactive video ad formats leave flexibility for advertisers to creatively integrate interactive elements and push budget towards their campaign goals: lead generation or brand awareness. The added bonus of interactive videos? Users can click directly on the icons or CTAs in the clip to get to a linked landing page with more information.

It’s almost like magic: how to draw attention to your video

Interactive video ad formats have the ability to offer elements that advertisers can use to turn their videos into real eye-catchers:

Video content has a positive impact on audiences. We’ve looked at how advertisers can save money on video production for their ads by using tools for their campaigns, such as interactive video ad formats and what advertisers can do with it. So, why should advertisers even consider using video mediums for their ad campaigns? Simply put: moving content brings high branding opportunities and business outcomes. According to HubSpot research, did you know that nearly 50% of Internet users encounter products via videos as their first touchpoint? Or that more than 40% of people want to see more video content from marketers? This leaves advertisers an opportunity to utilize different mediums to convey their marketing message flexibly, and most importantly, target to audiences who accept video ads.

With interactive video ad formats, advertisers’ campaigns could be placed within the in-feed of articles from premium publisher networks. Tailored content to their target group, business outcomes ensue for advertisers. Customers face an optimized experience, while advertisers achieve a noticeable boost in brand awareness, and potentially higher revenues.

We at plista have the tools to help you further boost your brand awareness and campaign performance. With our latest Interactive Video format, you as an advertiser can create a Branded Player or Shoppable Video to creatively engage your target audience. Learn more about our solutions here.

Theme by Anders Noren — Up ↑